Dave Walker, technical director of Distinction Doors, stockist and distributor of the fds (fire door systems) brand looks at the impact of the Grenfell fire on the fire entrance door market, before advising on the key factors for specifiying this new generation of composite fire doors.

During the post-Grenfell investigation, two undamaged flat entrance doors were removed from areas that were not affected by the fire and were subjected to BS 476-22 fire testing. Test results showed that the doors failed at just 15 minutes. The failure was reported to Ministry for Housing Communities and Local Government (MHCLG).

Further tests conducted by MHCLG, using doorsets from the same manufacturer removed from existing installations, concluded inconsistent results – anything from 14 to 40 minutes. The tests were carried out with the doorsets opening into the furnace.

This inconsistency sparked a thorough investigation of the fire door industry by MHCLG.

Prior to the fire at Grenfell Tower, it was accepted practice that fire door testing should be carried out with the door hung so that it opened-in, towards the furnace – testing from both sides was not required.

Single directional testing was based on the experience of notified bodies and test laboratories fully accredited by the United Kingdom Accreditation Service (UKAS). Opening into the furnace was deemed the most onerous direction, and so if this most onerous side passed, then there was no need to test the other. The Government test programme proved that this assumption (while true in most cases) was flawed.

While Annex A of Approved Document B (Fire Safety) allowed for the assessment of the most onerous direction for test, Appendix B (Performance of materials, products and structures) states that the tests be conducted on two doorsets, one hung opening into and one hung opening away from the furnace.

It was concluded that there were ‘performance issues’ with GRP composite 30-minute fire doors ‘across the market’, although it was noted that context must be given for the results which represent ‘only a sample of the market and are only relevant for the specific model of doorset tested from the manufacturers’.

More than two years’ have passed since the GRP composite fire door report was published and we can assure you that the industry has been proactive in its response. Key areas include third party certification, traceability and testing.

At the heart of this overhaul is robust testing. Under Appendix C: Fire doorsets of the latest version of Approved Document B ‘The requirement is for test exposure from each side of the doorset separately.’ One GRP composite fire door system supplier has raised the bar, satisfying not just the British Standard (BS 476-22 Fire resistance and smoke control tests for door and shutter assemblies, openable windows and elements of building hardware) but also the more demanding European test method standard BS EN 1634-1.

The test specimens included solid and glazed door leaf options, either with or without overhead fan lights and all doorsets were tested with letterplates, viewers and door closers included. All featured auto-throw locks.

Every fire test was filmed. The system achieved an average of 45 minutes integrity.

This level of commitment and robust testing has sent a clear message to the UK construction industry; you can achieve consistent fire resistance, compliance and peace of mind with GRP composite fire doors.

Since Grenfell several GRP composite fire door system houses, and members of the Association of Composite Door Manufacturers, have gained non-mandatory third party certification and taken control of their supply chain. This not only significantly reduces risk but also promotes stake-holder confidence. It also goes some way to meet the demand for improved product traceability.

One system supplier now insists that all stages of the supply chain up to and including doorset manufacture are third-party certified to the BM Trada Q-Mark Fire Door Manufacturer certification scheme.

Its door blank meets the requirements of the Q-Mark Door Blank scheme to STD 047 and the fire entrance door range is stocked and distributed under Q-Mark STD 171/050 for fire resistance and PAS24 enhanced security.

It is available across the UK through a network of official doorset manufacturing partners, each selected, audited and tested to meet the non-mandatory requirements of Q-Mark STD 170/050, to demonstrate and prove competence in manufacturing the system with a robust factory production control process.

By choosing to mandate the supply chain, this system supplier has more autonomy and control than its competitors. It can control all components apart from door closers and sealed units; however, these must match the tested specification.

Installation and maintenance are critical in the life cycle of fire doorsets. While great strides have been taken with the supply chain significant change will only occur if we can encourage installers to be certified and maintenance teams are empowered through product knowledge and access to data.

As custodians of a system which offers protection for both life and property in the event of a fire, our aim is to establish a future-proof technology which will close the loop on supply and maintenance, in utilising chips for key data storage, for example.

This would go some way to supporting the Building Safety Bill (published 5 July 2021) requirement for a golden thread of information ‘…created, stored and updated throughout the building’s lifecycle. Establishing clear obligations on owners and enabling swift action to be taken by the regulator, wherever necessary.’ 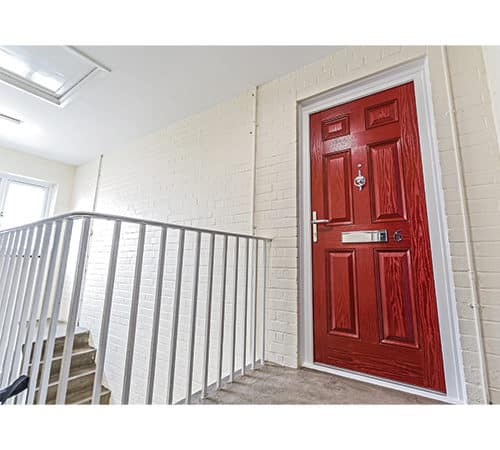